As the shale gas revolution continues to drive record levels of natural gas production, a growing number of power producers and industrial users alike are making the move to natural gas as a primary fuel source.  Attractive for both new generating capacity and as a replacement for capacity formerly supported by other fuels, natural gas is seen as both a cost-cutting measure and as a way to prepare for existing and up-and-coming, more stringent carbon emissions regulations.

Buoyed by confidence in both continuing availability and lower cost of natural gas compared to other fuels, those making the switch point to the growing case for both near- and long-term benefits.

By all measures, the level of U.S. 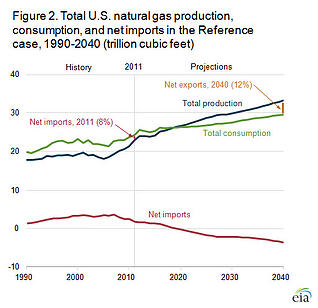 natural gas output today has exceeded even the most optimistic projections—and is expected to continue growing at a steady pace.

In addition to the sheer abundance of U.S. shale gas reserves, the continuing strides being made to gas production processes also support robust production.

While it is commonly understood that the new availability of natural gas is in large part due to the ability to access previously untapped stores of shale gas by leveraging modern horizontal drilling and hydraulic fracturing (‘fracking’) techniques, it is not as well known that ongoing innovation in drilling efficiency is continuing to improve the pace of production.

In fact, according to EIA, recent improvements in drilling efficiency have been so significant as to degrade traditional methods of production estimation, which until now were routinely based on rig counts.

EIA points to steadily increasing productivity of gas wells in basins across the United States as a result of both the improved efficiency and the precision of horizontal drilling and fracking methods.  As an example, data collected at the Marcellus Shale shows that a well completed by a rig in April 2014 will contribute over 6 million cubic feet (Mcf/d) of natural gas more—per day—than a well completed by that same rig in that formation just 7 years ago.

The trend of increasing productivity is an important factor supporting the overall increase in the nation’s natural gas output, not to be overlooked.

Not surprisingly, among the most 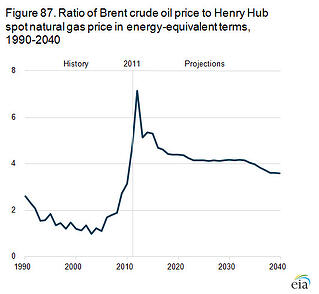 compelling reasons for converting to natural gas are the potentially significant cost savings the fuel can deliver.  Since the onset of the shale boom, U.S. natural gas prices have remained significantly lower than in prior recent years.  And with the abundance of domestic supply in addition to improved production methods, prices have continued to remain relatively low.

While EIA predicts prices will increase over time as natural gas resources from more easily accessible production areas are drained, prices are still expected to remain at historically low levels for years to come—and energy from natural gas is projected to remain less expensive than energy from oil through 2040.

Along with crude, coal too faces an expected decline in use as fuel for power generation.  While coal has historically been a lower cost fuel, EIA projects average coal price increases of 1.4 percent per year through 2040, as coal mining activity inevitably migrates into more challenging—and costly—reserve areas.

Add to this the efficiency of modern gas fueled power generation which is considerably higher than coal fired generation and the result is that gas competes with coal even when it costs considerably more. “When the ratio of natural gas prices to coal prices is approximately 1.5 or lower, a typical natural gas-fired combined-cycle plant has lower generating costs than a typical coal-fired plant,” according to EIA. 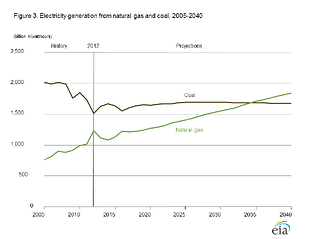 EIA estimates 15 percent of the coal-fired capacity active in 2011 will be retired by 2040.  During this same time-frame, only 4 percent of new generating capacity will be coal-fired.

For many of those making the switch to natural gas, a ‘standby’ or backup fuel system is essential for ensuring steady operations—both to supplement a potentially unpredictable fuel supply or in cases where there is risk of supply interruption.

Said Sandy Cates, Director of LPG Solutions, TransTech Energy “The demand for standby systems fueled by SNG is an obvious choice for anyone burning natural gas for power generation—and our deliveries of these systems has spiked ever since the shale opportunity took hold.”

Added Cates, “It’s a logical move. The ease of transition from natural gas to SNG, when needed, speaks for itself.  It’s a truly seamless solution.”